Aardman and the joy of stop-motion

Being a cinema nerd, I spent a good deal of my last Saturday browsing through imdb.com, scoping out upcoming attractions. To my sheer and utter delight, I discovered that the British film studio Aardman (Chicken Run, Wallace and Gromit) is releasing a new stop-motion feature due out March 30, 2012. The movie, based off a series of children’s books by Gideon Defoe, is called The Pirates! Band of Misfits. 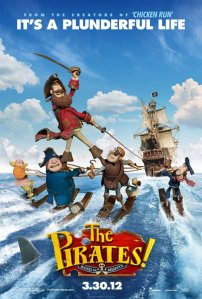 Based on my (repeated) viewings of the trailers, the plot of Pirates! seems simple enough. The enthusiastic-but-inept Pirate Captain (yes, that is his name) attempts to lead his motley crew to accomplish all things piratey (swashbuckling, plundering, and the like) in his quest to win the coveted Pirate of the Year Award.

From what I can tell, this movie looks like it’ll be clever and rich in visual gags, in classic Aardman fashion. I was sad to see that Nick Park, the creator of Wallace and Gromit, wasn’t associated with this upcoming picture. However, I noticed that Peter Lord, who has collaborated with Park since Park created the dog-and-man “odd couple,” is directing Pirates! So, there is hope that this film will have the heart and wit I’ve come to expect from Aardman features.

As you can probably tell from my enthusiasm for this film, I’m a sucker for stop-motion animation. In today’s movie-going environment, where bland, heartless computer-animated cash cows are cranked out left and right, it’s comforting and immensely refreshing to still see stop-motion films, which require such painstaking care to produce.

Stop-motion is by nature a slow process and requires dedication. The meticulous positioning and repositioning of each character’s appendages in every frame to create the illusion of motion never ceases to earn my respect.

I love the medium of stop-motion not only for the incredibly thorough process it requires, but also for its uniquely organic feel. Stop-motion features become even more enchanting when you pause to consider the fact that every single object you see onscreen was handcrafted by someone. The characters are sculpted, molded, and painted with expertise, and the set pieces are intricate models crafted with care. The fact that these characters and settings are beautifully real and tactile makes for an ineffably rich cinematic experience.

There is another unique quality of stop-motion that comes from its necessarily physical nature. The act of bringing these objects to life requires a human touch, literally. The most visible evidence of a creator’s hand can be seen in Claymation features such as Gumby or Wallace and Gromit. Because the material that these figures are made out of is soft, pliant, and yielding, oftentimes, if you look closely, you can spot the fingerprint of the person who manipulated the model blink over the clay’s surface. The fact that this film you are watching is literally the work of someone’s hand is inescapable, and the effect is enthralling.

Individuals like Nick Park, Peter Lord, and Henry Selick give me hope that this organic, artisan process can and will survive today’s deluge of digital effects. It makes me smile to know that the technique used to bring skeletons to life in Jason and the Argonauts is still being used today.

I'm just a girl who loves talking about music and movies. And music in movies.
View all posts by I've seen that movie, too →
This entry was posted in Movies and tagged aardman, animation, band of misfits, nick park, peter lord, pirates, stop motion, Wallace and Gromit. Bookmark the permalink.