The War of the Worlds, 75 years later

It’s All Hallow’s Eve Eve, and a special one at that. Today marks the 75th anniversary of the fateful evening when a 23-year-old managed to stir radio listeners into a panicked frenzy over a fictitious alien invasion. I am, of course, referring to Orson Welles and his now famous (and infamous) adaptation of “The War of the Worlds.”

A young Orson Welles at the mic

As you very well may know, Orson Welles’ broadcast is an adaptation of the famous sci-fi tale by British author H.G. Wells. In adapting the story, Orson decided to make a few changes. He set the story in rural New Jersey instead of the English countryside, and he told the story in the form of breaking news bulletins, rather than as a traditional first-person narrative. The result was incredibly potent, powerful storytelling that actually managed to convince some listeners that what they were hearing was, in fact, real.

To today’s cynical audience, wondering how people could be so easily duped, let me remind you of a few things: 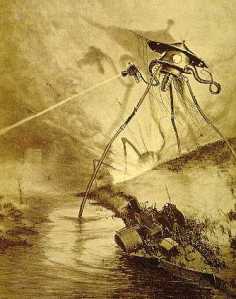 A taste of the imagery from the famous science fiction tale

Four years ago, I decided to finally give the famous broadcast a listen. Let me tell you, I sat engrossed in front of my computer for that tense hour, eyes wide as the incredible levels of description pulled me into the narrative. The structure of the broadcast is as brilliant as its content. There are moments of dead air after we lose contact with our intrepid reporter—long, uncomfortable silences hastily filled with studio orchestra music until a broadcaster comes back on the air, apologizing for the complications. If you haven’t listened to it, I highly recommend sitting down and feasting your ears and imagination on the terrifying tableau as painted by the masterful storyteller, Mr. Orson Welles.

I'm just a girl who loves talking about music and movies. And music in movies.
View all posts by I've seen that movie, too →
This entry was posted in Uncategorized and tagged broadcast, h.g. wells, halloween, orson welles, radio, war of the worlds. Bookmark the permalink.